Almost every decent fashion blogger I know has at least one spring post that begins with the words: “It was such nice weather this weekend that I couldn’t resist matching my summery mood with the brightest colors in my closet.” Quite original right? Later in the year it will be all about how to sport white and how it’s such a fantastic contrast to your tan.... but who can blame them!

With the first flirty sun beams out, I caught myself (guess it’s a natural fashion instinct) removing all the spider-webs from my peep toe boxes, lovingly dusting yellow satin and “attention blue” leather, when some frenzy kicked in. All of a sudden the living room looked like some clowns had quite the swinger party and left without their clothes and heels (question to myself: do clowns wear heels?): but wow! How cheerful!

So here you have it: am coming out of the closet as well. As a sucker for the first pop of color of the year that is. Let’s wait until the sun has done it’s job and I have a nice tan shall we? I almost can’t wait to write about how gorgeously white pumps support summery glowing skin.

Whenever it comes to the daily routine (mostly done in a rush between a still blurry eye and the first coffee, tooth brush still in your mouth) of picking your outfit for work, opinions couldn’t be more diverse. Unless your place of work provides you with logo sweater or you're working where I do (spotted a full fleece head-to-toe dinosaur suit recently), it will always come down to the question: comfy or business?

In the language of a heelalista of course this translates to choosing the high heel department or staying grounded in flats. Although I'm still 100% sure that only a decent inch looks cool while changing the toner of the copy machine, and will distract from the fact that you probably a) did not have the time (again) to iron your blouse or b) IF you did, immediately spilled coffee over it, I must confess that this season so many chic semi-high alternatives are out there that it’s kind of hard to resist.

Especially when you have to jump on your office chair in full disgust quickly upon discovering that you're not the only one busy at work: mice are also. So what is your office 4.0 solution ladies? Flat or fab? 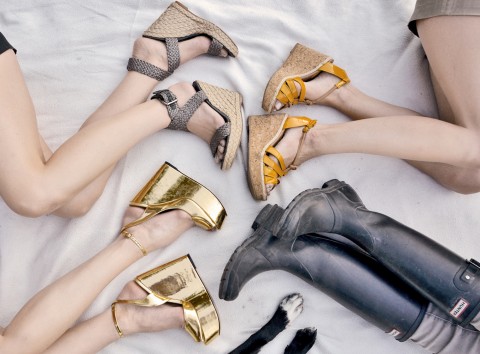