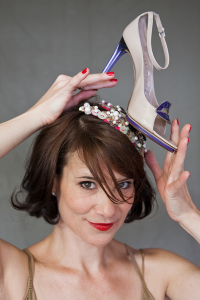 If you had enough pairs of shoes to wear a different set every day for an entire year, would you? Could you? That’s the idea behind ‘EddaLovesHeels’, the project-blog of Austrian-born, Amsterdam-based freelance designer Edda Müller. She intends to post each day – having ‘kicked off’ 1 January, 2012 with a barefoot toast to her dance-filled New Year’s Eve – and boasts a teeming closet that is more than up to the task. Each entry features an image of her decadent footwear, followed by a short personal statement describing that day in the life of the self-diagnosed shoe addict.

Edda spent five years touring Europe as a concert pianist after graduating from Salzburg’s Mozarteum in 1991, before transitioning to study graphic design in Linz. She re-started her career in 2000 at Euro RSCG Vienna, having spent time doing design for Johnson & Johnson, and Porsche. Over the next four years, her clients included some of the biggest retailers in Austria: Billa, Baumax, Libro and Telekom. By 2006, Edda decided a change in scenery was in order and headed west to Amsterdam. As a freelance art director, she balances a diverse clientele, including advertising agencies, international companies and small independent offices alike.

After an interview with Elle and Dutch blogger Kiki Düren where she casually mentioned the ‘experiment’ of wearing a different pair from her vast collection each day and writing about it, Edda took a page from ‘Julie and Julia’ and set off on her own shoe odyssey. She designs and shoots each the print-quality photos herself, often including apropos decorative elements (glitter, confetti, champagne; sunglasses, popsicle, copious sunshine) to construct an engaging visual narrative. Vivid colours, various camera angles and (often) her own sleek calves convey each scene in a manner as unique as the day that inspired it. And as if the images couldn’t speak for themselves, Edda’s own witty, bubbly written commentary follows, giving the reader a brief snapshot of her life, her thoughts on fashion gossip or a fuller description of any story that may have inspired the day’s shoot.